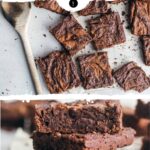 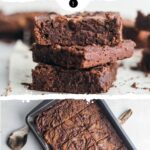 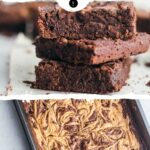 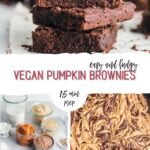 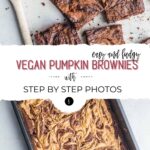 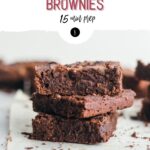 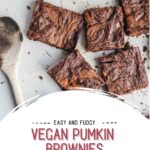 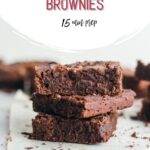 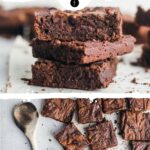 How can you make amazing brownies during fall and winter celebrations (or anytime)? By adding pumpkin! The taste of the pumpkin is dainty, and the texture has been carefully respected: soft, super fudgy, very chocolatey, but marbled with a swirl of spicy pumpkin cream. And it's healthier than traditional brownies, too!

Prepared without an electric mixer, and incredibly delightful, these vegan pumpkin brownies are child's play and ready in under an hour.

Make a big batch and freeze them for later, but honestly, they'll be eaten up long before then.

As the fall slowly begins to strip off, it's worth putting pumpkin in desserts rather than making a soup out of it. Honestly, I'm a better cook than a pastry chef, so when I came up with the idea of ​​venturing into an eccentric dessert, it had to be as immediate as slipping my feet into wide booties with no laces or zippers.

Okay, I'm not going to spark a debate on the texture of these brownies, whether they should be cake-like or fudgy (I'll save that for another day), but I'd say they lean more towards the latter. They're as delicious as my no-bake brownies with dates, which mimic the beautifully gooey classic texture.

In any case, these vegan brownies are presented in a disconcerting yet lovely way.

The pumpkin cream streams, frozen, snugly nestled in the brown crust, quickly activated my salivary glands. Later, I understood why these small square cakes made my mouth water at sight.

Each bitten piece melts on the tongue with a flood of buttery chocolate, with a hint of coffee. The brownie is rich, fudgy, and with the perfect touch of spices, evoking the warmth of the Caribbean. Intensely chocolatey, it drives our hands to grab other squares as if we were under the thumb of a puppeteer.

I ain’t complaining; the intrinsic will is there too, I assure you.

Notes on some ingredients

Jump to Recipe to see the technical sheet for the exact quantities.

How to Make this Dish Step by Step

Before getting to the heart of the matter, we must go through the preliminary phases. I add water to the ground flax, mix it well and let it sit for a few minutes to thicken. Finally, to make the pumpkin cream, I stir all the ingredients in a mixing bowl until smooth and creamy ① ②.

To prepare the brownie dough, I mix the sugar and the softened butter in a separate bowl ①. Then add the wet ingredients (including the flax egg) with spices in the dry mixture ②, and I whisk everything ③.

Using a flour sieve or a simple whisk—the idea is to make sure there are no clumps in the dry ingredients—I sift the flour, cocoa powder, baking powder, and salt above the pumpkin mixture ④.

After that, I gently mix ⑤. Then I pour the dough into the previously prepared baking dish. Using a spoon, I create "beds" or wholes, if you will, to house the pumpkin cream ⑥. After that, I just take a spoonful of the pumpkin cream and nestle it in the ditches ⑦. I put the removed dough aside. Then, with a chopstick, I make vertical traces crossing each pocket from top to bottom, or I do it freely, creating swirls. I retransfer the removed brownie dough into the pumpkin swirl and swirl away!

Once the humble work of art is done, I put it all in the oven, cooking it for 35 to 40 minutes. To find out if the mega brownie is ready, I insert a toothpick after taking it out of the oven and check that moist crumbs come out attached but not raw. If so, I let it cool on a cooling rack for a few minutes, then after that, I move on to the exciting part! I cut the cake in tic-tac-toe ⑧.

The texture is sublime and the brownies are ready to be engulfed in your mouth!

Be tight with the cooking time

Overbaking a brownie recipe can spoil it and make it dry and crispy. That's not the idea.

The good fat is where it's at

For the smoothest brownies, use solid fats at room temperature rather than liquid vegetable oils, producing a spongy cake texture. If you're from this school of thought, I'll let you do what you want. But if you like a brownie that melts on your tongue, then the following paragraph is for you.

Soft to the touch and easily spreadable, softened vegan butter makes rich, tender brownies. To do this, you can simply leave the butter on the counter for about an hour. We can also speed things up (I know, we're all in a hurry in another way. Are you the type to collect kitchen accessories that ordinary people hardly ever use? If so, you can soften the butter in a double boiler or something do-it-yourself, with the same function (metallic bowl resting in a saucepan filled with boiling water, for example).

If patience or grace is not your strong point, melt the butter outright over low heat in a small saucepan (it shouldn't brown!). It will be easier to mix into the pumpkin brownie batter anyway.

Note: if you are using margarine, it won't need to be softened. In coconut oil, it must be heated until it has a liquid consistency (it will harden at a cooler temperature).

To ensure fudgy brownies, weigh the flour for accuracy to 184 g. If it's not well measured, you could get a cake-like brownie!

Even though these brownies are pretty dense and tender, a little baking powder helps achieve a nice texture. So, it's worth not snubbing it.

This dessert can be made without the use of an electric mixer. You'll only need basic tools, such as:

As mentioned earlier, a double boiler is an optional tool for slowly melting butter, but it can be replaced with a saucepan filled with boiling water and topped with a metallic bowl.

I promise you'll melt in front of these egg-free and dairy-free pumpkin brownies. But if you get carried away with audacity, enhance them by serving them with a scoop of vegan vanilla ice cream or coconut whipped cream.

I like to enjoy them as a dessert, snack, and even breakfast with a good cup of green tea.

What's a brownie, and what texture is it supposed to have?

It's a small fudgy chocolate cake, in a rectangular or square shape, usually garnished with pecans or walnuts in North American cuisine.

What's the difference between traditional brownies vs. vegan brownies?

Traditional brownie recipes use eggs and butter to emulsify and bind, giving brownies their dense texture. To veganize them, we will attribute the function of the binder to a flax or chia egg or an assortment of starches; we will replace the dairy butter with vegan butter. If some recipes call for milk, we will use plant-based milk.

Can I use any egg substitutes?

Here, the egg property we're only looking for is as a binder. So chia egg (same preparation process), one of the commercial starch blends (like Bob's Red Mill, Orgran, Neat Egg, or Ener-G Egg Replacer), or aquafaba would probably work just fine.
By the way, aquafaba helps achieve that classic brownie texture while also releasing the characteristics of cocoa powder. It is recommended to boil it before adding the rest of the ingredients.

Can we put other vegetables other than pumpkin in brownies?

You can put vegetables from the same family in the brownie batter, such as zucchini or sweet potato.

Can I spread the pumpkin cream instead of swirling it?

Yes, of course. If your hands are lazy, nervous, or clumsy, it's also possible to spread all the cream on top.

How to Store this Dish

Once the brownies have cooled, simply transfer them to a resealable plastic bag or airtight container. Then, leave them on the counter at room temperature for up to a week, or place them in the fridge for up to two weeks. This recipe freezes great too! They can be put in the freezer for up to four months.

When ready to serve, thaw them in the refrigerator overnight or reheat in the microwave on a lower power/defrost setting to heat more evenly to the center.

This rectangular or square-shaped dessert is perfect for Halloween, Thanksgiving, Christmas, or anytime in fall. Its extravagant side will attract all eyes.

Obviously, these healthy pumpkin brownies won't be the dreary brownies you see on the tables during these celebrations.

The best part? They're simple to make. You combine the dry ingredients with the wet ingredients, spread your dough, and forge pumpkin cream swirls in it.

In less than an hour, splendid, chocolatey goodness will appear between your fingers, variegated with a spicy pumpkin cream that you will swallow with glee. 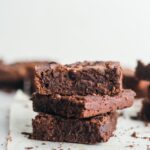