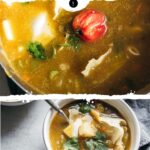 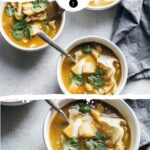 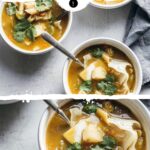 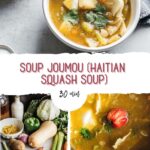 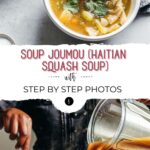 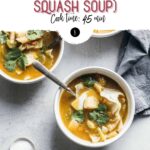 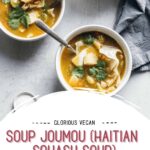 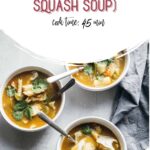 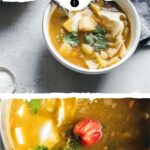 Extremely hearty, rich, and provided with sensational flavors that make this dish a unique experience to be shared, there's a reason for Soup Joumou to be Haitians' most memorable and beloved meal.

My vegan version has nothing to envy its meaty counterpart: it remains just as velvety and robust, radiant and steamy. Best of all, it takes around an hour to simmer, and it nurtures the same feelings of love, patience, and freedom.

For me, the New Year has long been synonymous with reunion and Soup Joumou (or giromon soup, as the French say). There is no doubt that the current context makes gatherings difficult. Giromon is the most common squash in the West Indies. It is commonly called calabaza squash, Cuban squash, or West Indian pumpkin.

And I thought I was done with squash. Well, no. How could I have forgotten the traditional soup of my Haitian origins? What's more, since last month, Soup Joumou has been listed as a World Heritage by UNESCO.

It's a great way to recognize the resilience of Haitians, who have suffered since their ancestors set foot on this island, immeasurable violence: slavery, political corruption, kidnappings, assassinations, natural disasters, and so on.

Authentic Soup Joumou is a hearty squash-based soup, I was saying, and enhanced with the richness of beef. I veganized it by simply removing the beef without losing the aromas! Yes, you can enter me in a magicians competition. I did this sleight of hand, this feat with beef-flavored broth (ah, ha! Brilliant, right?).

The good thing about this vegan version is that it doesn't take two days or even three hours to prepare. Because we skip the step of marinating the meat the previous days.

Bursting with veggies, it remains just as hearty and rich, coupled with a hint of sweetness. It's not thick like the traditional squash soup that you will find elsewhere.

In short, it's the type of soup that literally fills you up all day.

Jump to Recipe for the exact quantities

How to Make the Soup Joumou Step by Step

This Haitian squash soup begins by cooking the squash in broth until it softens (about 25 min) ①.

In the meantime, or ten minutes later, I prepare my aromatic base by finely chopping the allium (onion family), green pepper, and garlic ②. I throw most of them in a pot, let them sizzle in the oil, and add the garlic to the pile a few minutes later ③. Then come the celery and the carrot, which I stir in the base to make it even more fragrant ④.

I come back to my squash; I purée it ⑤ and pour it into the pot ⑥. I add the cloves, the last vegetables, and the pasta, which I let simmer for about ten minutes ⑦. At this point, I correct the taste using salt and pepper. Finally, I finish with the sprigs of thyme, parsley, and coriander. I immerse the hot pepper in the soup and let it simmer, while it surreptitiously diffuses its spicy but frivolous substance. ⑧

A good bouillon is worth a million

The type of broth will definitely determine the taste of the soup. Typically, we put beef in it. So to stay pretty faithful to this taste, try to find broths that simulate it. At worst, use a chicken and/or vegetable flavor. But the most important thing is to try several before you find the right one. I like to use it in cubes and especially in powder to measure the quantity. I particularly like a Canadian brand named Luda, which offers its no-beef broth.

After which, the portion must be determined. As for me, it's indicated on the bottle told to put ¼ cup of this powdered broth in 1 cup of water. I doubled the amount to make sure I had something tasty.

Ace the flavor base

Maybe I'm wrong, but I suspect that few people—speaking of Haitians—take this step seriously. There are basic aromatic flavors according to regions in the world. To the French, their mirepoix (mixture of diced onions, carrots, and celery in butter or olive oil), to the Italians their soffrito (mixture of melted sliced ​​onions, carrots, and celery and browned in olive oil), to the Catalans their sofregit (mixture of chopped onions and tomatoes melted and browned in olive oil)...

And well, me, I think we should have our basic systematic taste too. Something between the Puerto Ricans's recaíto and the West Africans' ata lilo. I really believe that taking the time to brown a mixture of allium (yellow onion, green onion, French shallot) with green pepper, garlic, and optionally parsley and cilantro in oil should be our foundation for the majority of long cooking Haitian preparations. Moreover, this is precisely what we find in our basic seasoning, our kind of "Haitian pesto" called Epis (pronounced "épeece").

The starches from the pasta and the potato during long cooking may thicken the soup. Ensure all other ingredients are cooked through before adding the pasta or it will become soggy. Or ensure the tubers and turnips are cut small enough to reach the same cooking point.

Also, the constant evaporation and boiling of the soup may cause this. In this case, dilute it with additional water or broth.

This Soup Joumou is often served with crusty bread or rolls. Speaking of starches, some recipes include dombrés, cigar-shaped flour balls.

Do not despise the soup which has become thickened. Turn it into a sauce to cover a bed of rice, quinoa, or other types of cereal.

Squash has been the star lately. Try all these other recipes!

What is the tradition of Joumou soup?

This soup is traditionally served on New Years Day and is prepared very early in the morning with lots of squash and beef. All Haitians start the New Year with this soup, no matter where they live. On January 1, the tradition is to catch up with friends that we have not seen or rarely seen during the year. On this day, they wish all their neighbors and friends a Happy New Year, and they send their children to do the same to others. The children in turn, receive gifts, money, meals, and especially cake. If people visit them, they offer them a homemade cherry grenadine drink and Joumou soup.
Haitians don't cook much on New Year's Day because they are preparing to celebrate Ancestors' Day, January 2, a commemoration of their ancestors and their Heroes who fought for the Independence of Haiti. It is sometimes extended to all deceased loved ones. On New Years Day, they clean their homes and prepare the turkey for the feast the next day. It's the biggest meal of the year; the animals are slaughtered 🙁 and everyone is well served.

What's the story behind the Soup Joumou?

This soup was long synonymous with oppression on the Caribbean island. Although many slaves cultivated squash, essential to preparing the giraumon soup, they were deprived of it. This dish was considered superior, and its tasting was reserved for the French plantation masters.

However, on January 1, 1804, when the first Black republic was born, Marie-Claire Heureuse Félicité, wife of former Haitian leader Jean-Jacques Dessalines, chose to serve this meal to the masses."Soup Joumou pou tout moun! (Translator's notes: pumpkin soup for everyone!)," I imagine her saying. Since then, all Haitians have savored it, especially on New Year's Day. Sometimes it is even called the Independence Soup or Freedom Soup.

Note: Haiti gained its independence on November 18, 1803. On the other hand, it was not until January 1, 1804, that the Declaration of Independence was signed. So it was officially celebrated on Ancestors Day, on January 2. On this day, the president speaks to the nation, and parades occur.

Can I substitute frozen squash for calabaza squash?

Squash cut into cubes and frozen, maybe; puréed frozen squash is no, no. The taste will change completely.

Can we use Haitian seasoning Epis?

Sure! Use Epis in place of chopped seasonings or in addition. It also saves a lot of time.

Can we add Maggie bouillon cubes?

Even though most Haitians use it, I prefer not to. These products contain monosodium glutamate (MSG). I run away at full speed when I see this ingredient which I consider questionable (that's my opinion, eh).

Can we add Cajun or adobo spices to the Soup Joumou?

Avoid doing this at all costs. It's not because the words "Creole" or "West Indian" are written on spice blends that they will integrate well with Haitian recipes. I have tasted different Caribbean cuisines, and I can tell you that they are all different from each other.

Adobo spices are part of Puerto Rican cuisine and include cumin, oregano, and other varieties of peppers. Cajun spices belong to the cuisine of Louisiana in the United States and include paprika and oregano. These spices do not appear in traditional Haitian recipes. If you add this, the taste will change completely.

Can we add mushrooms to Soup Joumou?

I don't recommend it to you. Trust me, I tried this a few times to simulate the meaty texture, and it drastically changed the taste. If you really want to, sauté the mushrooms SEPARATELY and add them at the VERY END.

How to store this dish

Soup Joumou is best served hot, but it can be stored in an airtight container for 3 days in the refrigerator or 3 months in the freezer.

You will probably need to add more liquid, as it will have thickened.

This hearty and delicious soup is most comforting to start the year and meet your loved ones—whether remotely for health security reasons or in person.

You will appreciate the aromas diffused from the soup in your kitchen and the welcoming bites of this dish in this winter weather.

In addition, it will give you the strength and courage to face the challenges of the coming year. 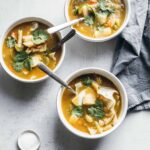 Soup Joumou is synonymous with victory and freedom. It is usually cooked in a large pot to feed many people. It is made from calabaza squash, but can be substituted by butternut squash, kabocha, turban (Hubbard). This is my veganized version. I divided the original recipe in half, but if you make it in a larger batch, it will just act as a standby to comfort you when you need it.
Prep Time25 mins
Cook Time45 mins
Total Time1 hr 10 mins
Course: Soup
Cuisine: Haitian
Diet: Vegan
Keyword: butternut squash, green pepper
Servings: 4
Calories: 295kcal
Author: Naïby

The starches from the pasta and the potato during long cooking may thicken the soup. Ensure all other ingredients are cooked through before adding the pasta or it will become soggy. Or ensure the tubers and turnips are cut small enough to reach the same cooking point. Also, the constant evaporation and boiling of the soup may cause this. In this case, dilute it with additional water or broth.