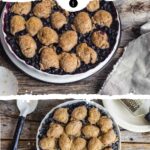 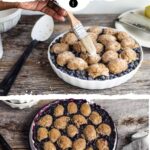 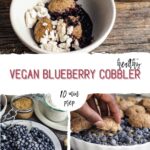 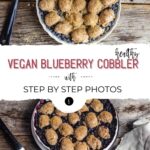 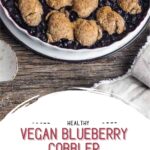 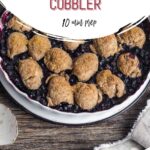 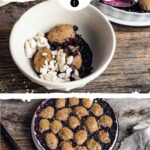 This dairy-free and eggless blueberry cobbler touches all the sweet spots of gourmets. It has a biscuity topping, chewy, slightly crispy on top, with a buttery taste and a delicious mix of juicy blueberries.

This healthier version only takes 10 minutes to prepare, and I'm sure you'll be gobbling up chunks of it in under two minutes.

Before the summer ends, I urge you to escape to the countryside to pick a ton of blueberries. This is the most paramount recipe to make after plum crumble.

Otherwise, this easy dessert is easily eaten with frozen blueberries during the winter holiday season or any other occasion.

If you love American biscuits or British scones, plus berries, you'll love mixing the two in a fruit cobbler!

Fruit Cobbler is an American dessert that usually has a biscuit-like dough topping. It's a little crumbly on the outside and soft on the inside.

This topping is perfect for hot blueberries, reduced to a compote.

I know there are a million recipes for homemade blueberry cobbler on the interwebs, and people probably want a different take on the concept, but that's not the point of this recipe. This cobbler is unassuming, it doesn't reinvent anything, it doesn't tie up your sneakers' shoelaces for you.

It's only supposed to do one thing: be a great cobbler. And it is besides having a healthy dimension.

The topping is light and rich at the same time, just like a good biscuit should be. Its fruits are only moderately sweet, its juice barely bound by a spoonful of flour. It's perfect.

I love its simplicity and that it can be spooned, à la bonne franquette (casually without any fuss), no matter where you are. If you stand at the counter and eat it out of the pan, like I did, I won't judge you.

See the recipe sheet for the exact quantities.

How To Make This Dish Step By Step

To assemble, you spread the mixture evenly in the greased baking dish ③, which you cover with dollops of dough. It doesn't have to be perfect. You just have to place large spoonfuls of cookies all over the place to look like a sort of "cobblestone road" ④.

Finally, you brush the top of the dough with a little milk or vegetable butter ⑤. You put it in the oven and you cook it all ⑥.

Don't use canned fruits. They contain added sugar or colorings that are undesirable. In addition, they're soaked in liquid which will make the result too runny.

Be patient and chill.

I know you’re going to want to dip your spoon in the cobbler but be patient! As the cobbler cools, the interior begins to thicken, creating a melt-in-the-mouth texture we all love! Ignore this advice, and your preparation will be too runny.

Customize the crust to your liking.

The butter should be cold and cut until the dough resembles coarse breadcrumbs to have a more flaky dough.

Before going wild with this dessert, don't forget to let the cobbler cool down at room temperature for 20 minutes before serving. This allows the berry juice to thicken and form a jam-like texture.

Then take chunks of cobbler with a spoon or pour them into a shallow bowl and garnish with your choice of plant-based toppings:

What's the difference between a crumble, a cobbler, and a crisp?


A lot of people get confused about the terminology. Oftentimes it happens between crumble and cobbler. Perhaps this is because they all have this in common: pieces can easily be spooned out and transferred to the plate without needing a sophisticated presentation.

However, both are made with a juicy layer topped with almost identical ingredients, but they have very different textures.

• Crumble: it's a satiating dish of British origin, containing a fruit compote topped with a crumbly filling (fat, flour, and sugar). It's baked until the topping is crisp. The most common fruits used in crumbles include apples, blackberries, peaches, rhubarb, currants, and plums.

• Cobbler: it's a traditional American dish, consisting of a filling, usually fruit, covered with a layer of pastry as a crust. While the crumble and crisp have crumbly toppings that resemble muesli/granola, the cobbler's crust looks like pieces of biscuit dough, chewy, with a buttery taste. It evokes a paved road. The name also refers to a cobbler who 'pieces' things together, like in this easy-to-make dessert.

Can I use other types of fruit for this recipe?


Sure! It's not just berries that make great cobblers. Usually, apples, peaches, and berries are the most popular but go ahead with rhubarb, although it's more often found in crumbles. Cobbler is very versatile!

Can I use frozen blueberries for a blueberry cobbler?


Yes, you can totally make a blueberry cobbler with frozen berries. In this case, thaw them a little before using them in the recipe or simply skip this step (cooking will take longer, though).

How to Store this Dish

Place this vegan blueberry cobbler in a sealed container or keep it directly in the baking dish, covered with foil or wrap. It will keep for up to three or four days in the refrigerator.

You can serve the leftovers of this cobbler cold or warm them slightly in the oven before serving in a preheated 325 °F (150 °C) oven until the crispy topping and topping are warm.

This easy-to-make dessert calls for fresh blueberries, but as mentioned above, adding any berries medley in this cobbler recipe works wonderfully.

Use seasonal or frozen fruit and make this cobbler recipe that doesn't take forever to make and can be made any time of the year.

Your palate will rejoice in this delicacy that is slightly crumbly on the outside and soft on the inside. 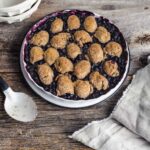 For the cobbler's biscuit dough:

For the fruit filling:

Allow the cobbler to cool, so the inside thickens. To have a flakier dough, the butter should be cold and cut until the dough looks like coarse breadcrumbs.