Look at that. Some nice savory Buffalo wings. Buffalo cauliflower wings, that is. Yup. Crazy, huh?

Tell me, is coming up with totally plant-based recipes that are better alternatives to meat dishes and appeal to your taste buds your biggest challenge?

If you’re a total meat eater, living a wingless life is probably a hard thing to do. And if you’re a plant-based eater, then living a tasteless life is hard to do too!

These took many tries to get them right, and I think I’m pretty close to the real thing.

You’ll be surprised by how “meaty” cauliflower really is.

4 Surefire Strategies to Guarantee Your Cauliflower Wings Are Crispy

Let me tell ya, making crispy look-alike chicken wings was a challenge. When I looked at most of the photos and videos, anyone would be fooled. I was comparing different recipes like a mad woman trying to figure out why I failed at my first attempts!

Many food bloggers made it look so easy. It’s as if they were saying (in an imaginary high-pitched voice): "It’s so easy to make cauliflower wings, yea! All you have to do is this and this and that. Peace of caaaake!"

Yeah, sure. I guess it is easy when they’re fried. But baking them to make them healthier is another ball game. Maybe that’s where the difficulty was, who knows (although I’ve seen many successful baked versions).

In the end, after a few fails, here’s what I learned:

1. For a wrinkled skin appearance, you need to dip the cauliflower florets in a batter and bread it. Some recipes use only flour, but adding breadcrumbs is key to making them crispy before the sauce goes on. (Gluten-free breadcrumbs can be used instead, but you might want to toast them to make them crispier.)
2. Your batter can’t be too watery, or else it will not cling to the cauliflower and the 'wings' will be soggy. Oh, and you need to make sure the cauliflower is not overly coated with the batter, or else it will pool on the baking sheet. Drain as much as possible.
3. Grease the pan lightly with vegan butter instead of olive oil as olive oil will burn the bottom of the florets.
4. Bake the coated cauliflower at a high enough temperature so the water from the sauce evaporates fast, like 450°F.

I learned a lot of these tricks from Jessica in the Kitchen. Her suggestions seemed really helpful and her photos were pretty convincing.

Now let’s talk about what makes these cauliflower wings stand out.

The Sweet Sides of Sauces

Buffalo wings are usually covered with hot sauce and served with a ranch dressing. Most of the time, store-bought sauces like Franks Redhot Buffalo Wing Sauce usually contain preservatives, additives, and other unhealthy ingredients.

That’s why, I decided to make my own, homemade BBQ hot sauce — well mildly hot, because lil’ man can’t handle the heat. You know what? Me neither. I’m a total wuss.

This sauce contains mostly wholesome ingredients like sun-dried tomatoes and dried chipotle pepper, which are soaked beforehand to soften them. (If you don’t want to bother with this step, well, I won’t judge you if you use a store-bought sauce, okay?)

Important note! you should start soaking them ahead of time, at least 2 hours. Ideally, do this a day prior.

The sauce is then spiced with apple cider vinegar for acidity, ginger and mustard for hotness, and other spices for depth of flavor. If you don’t find dried chipotle, you can replace it with dry flakes.

The "BBQ" sauce recipe comes from my collections of recipes from my raw food days. I adapted it to make it with fewer ingredients. I should just call it a mild hot sauce actually (and drop the quotation marks while I’m a it). My man invited a colleague over for dinner the other day, and he was like: "Nah, that’s not a BBQ sauce. But I’m amazed at the taste, though!" ?

Now my ranch dressing? I was really pleased with it. I made it with homemade almond milk (any plant-milk will do), cashew nuts, nutritional yeast, spices, and herbs. The flavors were well-balanced, so the dressing was all ready to receive my cauliflower bites with open arms.

I’ve had been longing to do this for the Super Bowl weekend last February, but I was out of luck. My temptations to prepare them never left me, though. For July, I felt inspired to create BBQ or picnic-inspired recipes.

The cauliflower is cut into florets with tips resembling a drumstick. (Don’t worry if they don't resemble them to a tee. Do your best.) Then, the "drumsticks" are dipped into an almond milk batter and thickened with chickpea flour.

I love the idea of using chickpea flour as a thickener as it contains some good quality proteins (the one I use has 6 g per ¼ cup). Some recipes add corn flour if all-purpose is used instead, which is another option.

After, this is when the crispiness comes in. You cover the preparation in breadcrumbs (I used Panko breadcrumbs) and bake everything for a little bit until golden. Meanwhile, you finish preparing the sauce.

For the grand finale, you coat the pieces in hot sauce and bake them again.

When they came out of the oven, you could see that golden dark caramel color covering homogeneously the little white trees. As you get closer, you can admire the nooks and crannies on the surface and sniff the sharp scent emanating from the apple cider vinegar and the mustard.

When you cut one "wing" open, the knife slides softly to unveil the white flesh. And when you sink your teeth into one, what hits you first is the crispy and slightly spongy layer. As your tongue hits it, you are comforted with the warmth of tomato flavor and awakened by the heat of the ginger.

To cool off the heat, celery sticks are usually served with this dish so don’t skip that step. So is the ranch dressing. You can devour the cauliflower bites alone as appetizers or use them as fillers in tacos. Pierce them with skewers and accompany them with grilled vegetables. Toss them in salads or settle them over rice. Your options are endless. 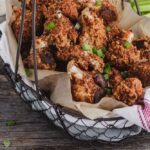 With a recipe like this one, you won't struggle with finding satisfying meatless recipes.

Now you learned how sauces are everything. Sauces are the secret to elevating your dishes.

You also learned that making cauliflower wings is easy. All you need is a batter, breadcrumbs, and a hot sauce. Then you accompany them with cooling agents like a ranch dressing and celery.

And when it comes to crispy textures, breadcrumbs go a long way.

So go ahead. Find comfort in those hot, spicy, and tomato-flavored cauliflower wings.

And surprise yourself and your friends with healthier "meat".