Finally, here’s a cauliflower pizza crust that has everything you’re looking for in a healthy, gluten-free pizza crust — tasty, crisp, and light.

It holds quite well in your hands at room temperature, and it makes excellent cold leftovers (if you manage not to gobble everything).

Do it in 7 steps and garnish it as you wish. You can eat it every day without feeling guilty!

When I spotted cauliflower-based dough recipes on the web, I was afraid I wouldn't succeed in making it. What if I fail completely? I read discouraging comments from people who complained that their attempts were soggy.

So, being a finished perfectionist and the queen of the shortest path, I wanted a surefire recipe.

I ended up finding a recipe from Detoxinista that looked promising.

And I wasn't disappointed! It was perfect.

The crust doesn’t fall apart. It's moist, and you don't even notice the taste of cauliflower.

Be careful, though. It holds well, yes, but it remains quite fragile, like most cauliflower-based crusts. It has floppy edges and is flexible, but it’s certainly not soggy.

I've changed a few things, like seasoning the dough, but other than that, it tastes similar to wheat flour pizza crust. This pizza smells great ?. And I was full after a single slice. I think two slices would have been the maximum because each serving is quite rich in protein.

But if you want to eat pizza, at least you can feel like that's what you're doing. The result is stunning!

What's in a Cauliflower Pizza Crust?

Here's what you need to make the cauliflower pizza crust.

Flaxseed - to hold the dough, I stirred freshly ground seeds and water together and let the mixture rest until a white-style egg gelatinous substance formed. It's called a flaxseed egg.

Natural almonds - to grind. Commercial almond flour will do the trick too.

Garlic powder - it's hard for me to cook without garlic. Garlic powder has a more concentrated flavor than fresh garlic. But fresh crushed garlic works here too.

Onion powder - I can't do without it, either. I use it everywhere to give flavor. In powder, it’s the same principle: the flavor is more concentrated.

Dried parsley - it adds a small dose of iron.

Salt - I always use sea salt.

Marinara sauce - I've prepared mine, but any sauce works.

Fresh oregano - it's an excellent choice to recall the Italian style.

Macadamia nut ricotta - a ricotta style vegan cheese. I've prepared mine, but if you find something similar and already made, don't mind using it to save time.

Arugula - to add color to the red surface.

How Do You Make Cauliflower Pizza Crust from Scratch?

The recipe begins with cauliflower florets, which are transformed into a rice texture in the food processor. Then, this cauliflower rice is lightly boiled, drained, and pressed dry. This creates the basis of the "paste."

Apparently, it doesn't really matter the order in which you reduce the florets and cook the cauliflower rice.

Afterward, herbs and spices are added with almond flour and a flax "egg". And finally, the dough is then shaped into a ball, patted and spread in a crust, then baked.

To make this pizza crust a success, I spread the dough with a slanted spatula on a pizza pan lined with parchment paper. I kept the edges a little thicker than the center. This allows the middle of the dough to cook faster.

The key to getting a dry vegan cauliflower pizza crust that you can hold with your hands is to drain the moisture first as much as possible.

Use another piece of parchment paper to help you turn the cauliflower pizza crust.

Other Ways to Make a Cauliflower Pizza Crust

The dough: If you have nut allergies, you can try ground sunflower or pumpkin seeds. Maybe even hemp protein powder would work. Also, I've seen some recipes that use other binders like cornstarch or potato starch instead of arrow-root.

What to Put on Cauliflower-Based Crust Pizza?

Sauce: I used a marinara sauce that I made from scratch, but you can use any one bought in the grocery store.

Cheese: Make your own mock cheese with almonds, cashews, or macadamia nuts as a base.

Topping: I topped my pizza with pizza-inspired ingredients that my boyfriend always orders from a restaurant we love in Mile End. Pizzeria No. 900. It contains arugula, garlic, oregano, tomatoes, and capers. There’s also Parmesan cheese, breadcrumbs, and some type of cold meat.

I didn’t add the last three. I replaced Parmesan with a macadamia nut ricotta, and next time I'll try to make some type of breadcrumbs to add more crunch and color contrast of green vegetables. Play with the toppings. I don't need to tell you that you can add onions, red peppers, olives... whatever.

For people who are following low grain diets or animal-free foods, this crust is an excellent option.

As it’s composed mainly of cauliflower, it’s low in calories.

What's more, cauliflower is one of the anti-cancer and anti-inflammatory foods. This crust also contains flaxseeds, which are ideal for reducing the risk of cardiovascular disease and improving your cholesterol levels.

Finally, these two ingredients are full of fiber, which is low in carbohydrates!

Prompt answers to your other questions

Does cauliflower crust pizza contain flour? It doesn't contain white flour, no. But instead almond flour. Almond flour is produced from ground almonds.

Can you freeze a cauliflower pizza crust? Simply spread the pizza dough on a pizza pan and cover it with saran wrap before putting it in the freezer.

It's rare to find a healthy pizza with non-binding ingredients, but no more now!

So run to your kitchen and get cooking! 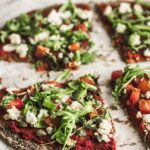