In Canada, this holiday has been over for well over a month now, but I can imagine Americans who took their time to prepare their big meal for the big day.

I know how difficult it can be to deprive yourself of stuffing, a delight that brings so many festive memories and happiness.

Do you think that I’d do without it or that I’d just look at it out of the corner of my eye like an animal watching its prey?

Hell no! If you're anything like me, you wouldn’t want to feel sidelined or deprived of this traditional dish.

Well, you know what? I found a way to veganize it, my friend! You won’t stuff the turkey with it; nah uh, you'll stuff your mouth with it.

And it’ll be served as a side dish instead.

You’ll see, it’ll be as tasty and rich in flavor as the traditional recipe.

Here’s how to make your bread a winner

To have a good stuffing, it starts with the main ingredient: bread.

Another thing, if you don’t want to end up with a pasty disaster in your mouth, you'll have to follow the next steps. So, you’ll need:

1 / The right type of bread: white bread will soften and lose its shape when diced and after baking. So you’d better choose a firmer bread. I decided on sourdough bread. But wheat bread and ciabatta bread, apparently, will also do the trick.

2 / A dry bread: the idea is to turn bread into breadcrumbs. You can dry your bread by letting it sit on the counter all night or by putting it in the oven for a few minutes. I even think you could put it in your toaster at a low intensity—an even faster method (oh yes! I’m all for it 🙋‍♀️).

3 / “Enough space” between your bread pieces: once the bread is cut into pieces, I advise you to spread them over a large surface of a baking dish. This will help them finish with a crispy texture when baking.

Once you understand this, you can enliven your stuffing with other ingredients no problem.

And it's really not complicated

You know, I tried to dive deep into my memories to recollect the first time I tasted this delicacy and I came back empty-handed. As empty-handed as an unfortunate pirate returning from a treasure hunt.

It doesn’t matter, though. My first impression is now engraved in my memory and, in recent years, I’ve seen roasted turkey accompanied by stuffing often enough to be inspired to recreate it—on its own, as a side dish.

Wondering how tantalizing it’ll be, huh?

As a rule, turkey juice acts as a flavor enhancer. In fact, that's what gives the umami taste (a Japanese term meaning tasty). I'll cover this later.

Anyway, since I never prepared stuffing before—neither animal-based nor plant-based—I had to go do some research on the Interwebs.

After reviewing several recipes, I understood you could easily make a vegan stuffing in four simple steps (see step-by-step guide below).

But I’ll give you the details of my creation right away.

Because my stuff is very tasty

To concoct my stuffing, I first cut my bread into pieces and I dried them into breadcrumbs (croutons) with the baking method.

Then I sautéed onion and garlic in oil (I could’ve also done it in a little bit of broth if I wanted to avoid fats). Several recipes include celery, but I didn’t do it here because, I don’t know, I wanted to be a little different. I preferred adding sautéed cremini mushrooms instead and for a specific reason (stay tuned).

After that, I combined the breadcrumbs with the sautéed vegetables, plus other affinities.

As many stuffing recipes contain a mixture of sage and thyme, I followed suit. Anyway, I totally agreed with this combination of herbs. They add a depth of aromas that go well with any type of poultry—hey! mine is invisible.

I think they are the preferred herbs in the traditional recipe. And I understand why.

As the dish was baking, they perfumed my kitchen with such a pleasant scent.

Now let's talk about the broth. Earlier, I mentioned turkey juice. In this vegan recipe, the broth (a vegetable broth, obviously) will be the one that recreates the "meaty" taste, the umami.

Remember my sautéed mushrooms? I gave them the role of intensifying it precisely, in taste and texture.

I mixed everything and made sure that the breadcrumbs, well everything, soaked in the broth long enough before baking the dish.

Finally, just before the end, I sprinkled crushed walnuts on top, which roasted for a few minutes. Know that the apple, raisins, and walnuts are optional.

When I took my dish out of the oven, I could not wait to dig my fork in there. At the first bite, your teeth break a crispy surface and then sink into a moist dimension, brought by the softness of the inner part of the breadcrumbs and the melting flesh of the mushrooms. The flavors explode in your mouth. The pleasant and savory taste of the broth and the roasted aromas of the nuts invade the palate and caress the cheeks with a comforting, festive warmth.

How to Make Vegan Stuffing Step-by-Step

1 / Turn the bread into breadcrumbs (as mentioned before).

4 / Bake in a baking dish covered with foil and then, uncovered to brown the top.

During the holidays, the traditional stuffing may seem inaccessible to you. Because it’s often made with or out of meat.

And when this happens, you're ready to ring the death knell of your tasting.

But it doesn’t have to be this way.

You can turn traditional stuffing into an enjoyable dish of the same caliber. You don’t need much. Essentially, breadcrumbs, sautéed vegetables, and a tasty broth.

Follow the instructions below to prepare it as soon as possible.

You won’t be disappointed. This vegan stuffing will awaken your taste buds and those of other guests.

Even unshakable meat eaters will love this version too. 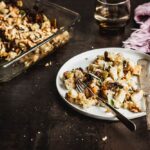