You don’t think it can be as decadent as the traditional version?

Sweet, rich, melting... those are the things that make your eyes roll when you indulge in a sugar pie.

To this, add chocolaty and caramelly... and OMG! You’re a goner! You’re in another universe, you’re in heaven.

The problem is, making this type of pie has a couple of downsides.

Primo, it requires that you be patient (two hours on average to bake it). And second, it’s suicidal.

Yeah! it’s suicidal because eating this type of pie involves the ingestion of ingredients that will bring your insulin level and your scale’s weight indicator to the roof.

So how can you indulge in this treat without the harmful effects and, above all, without the guilt?

Don’t worry. I have the solution that will satisfy your fantasies.

A little bourbon or rum is often added to the filling. This enhances the slightly sour-sweet, almost caramel-like pecan flavor and also counteracts the pie’s sweet taste. Pecan pie is probably the most famous dessert there.

But its history is nebulous.

Some say the French invented this sweet pie after settling in New Orleans as they were introduced to pecans in the 18th century. Others say it appeared in Alabama in the 19th century, but there’s no evidence.

It’s also believed that the economist of Karo house — a company specializing in the manufacture and distribution of ready-to-eat products — created this recipe in the mid-1920s. That’s because the pie often contains Karo (corn syrup).

In short, what we know for sure is that the company really popularized in the 40s and 50s and since then, it’s been an integral part of the of Southern American culture. We can find several variants of it: caramel, cinnamon, peanut butter...

Anyway, who cares where it comes from! We thank the inventors for creating such a delight, which is especially shared during the holiday season.

A Quick and Reinvented Pecan Pie

In the traditional version, the filling is what makes the pie yummy.

You have to prepare the dough first. I'm not a baker at all, so I won’t explain how to make it. All I know is that it can take about 1-2 hours. Then you need to roast the nuts. After, you prepare the filling — you melt the chocolate and the mixture with the other ingredients (eggs, corn syrup, sugar, cocoa powder, bourbon, and salt). Finally, you decorate the top with nuts and cook for 45 minutes.

My no-bake, raw version takes at most 30 min. It includes the crust and the garnish.

… it includes 2% maple syrup and an ingredient that is not the most whol-y.

Oh! No, you didn’t! I totally did. Come on! I don’t think 2 teaspoons rum will kill your brain cells that much. Ok, maybe a tiny little bit. Here, I made an exception to stay faithful to the theme and for another reason that I’ll explain shortly.

For the texture, when I saw that the original recipe required mixing nuts and cocoa/chocolate, I immediately thought of my brownie recipe. I followed that recipe and added figs to add a soft and melting side.

Then I replaced the corn syrup of the original recipe with maple syrup to bring a little more moisture. For the crust, I used nuts. I confess I hesitated first because I felt there were too many nuts. And then I thought: well it's like eating an energy ball or bar in a different form. To lighten it up a bit, I added some grated coconut. As far as alcohol is concerned, at first I wanted to put some rum extract.

But when I looked at the ingredients at the grocery store, I immediately got turned off.

The Case of Forbidden Ingredients

Yeah… My eyes stopped at "propylene glycol" and it was the end of it.

Forgive me, but I didn’t like the idea of putting windshield washer in my food. Just like ethylene glycol, glycols found in most edible products are the active ingredient in several surprising products.

For example, here's what Health Canada has to say about ethylene glycol:

In lesser quantities, ethylene glycol may also be used in asphalt emulsion paints; as a coolant and heat transfer fluid; in low-pressure laminates; in brake fluids; in glycol diacetate production; in low-freezing dynamite; as a solvent mixture for cellulose esters and ether; and in cellophane, cosmetics (up to 5%), lacquers, alkyd resins, printing inks, wood stains, leather dyeing, textile processing, humectants, ballpoint pen inks, detergents, solvents, polyurethane foam, medicinals, adhesives and other products (ATSDR, 1993; Lewis, 1993). The quantities used in Canada for each of these products is not known.

Some people think that these components don’t pose a great health risk, but I prefer to abstain. Thousands of studies have already shown their toxicity. (Source)

Ok, so organic rum extract was definitely a better option, but I couldn’t find any.

So I opted for real rum. Here. End of story. I wanted Barbancourt rum (which comes from my parents home country) but I didn’t have any (pain).

Anyway, rum won’t be responsible for making you lose your mind; the taste of chocolate and the melting texture will.

All in all, this pie is simply lu-xu-rious. And wait a second, VERY rich. So don’t go crazy stuffing your face with it.

You're not supposed to take more than one slice. No more than a small slice, ok?! 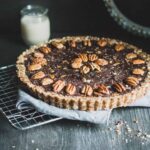