The radicchio salad is very appetizing but also very nourishing and cleansing. As well as radicchio, it has endive and arugula to keep your cells happy and degenerative disease-free!

What's the Difference between Radicchio and Red Cabbage?

Maybe you think it’s some kind of strange red cabbage. Maybe you’ve already wondered if you’ve put red cabbage disguised as radicchio inadvertently into your recipes. Maybe once, you’ve asked the cashier what the difference was, and she didn’t know any more than you did.
No kidding! I already heard a story like this.
Once, someone went to the cash with one radicchio, and the cashier entered the red cabbage’s code of out of ignorance. Because red cabbage and radicchio sometimes look alike.
But when it comes to price, the radicchio costs five times as much. And when it comes to taste, they are as different as parsley and cilantro.
Keep reading to know even more differences between the two and why it’s worth using this purple Italian leafy vegetable in your recipes.

How to Differentiate Radicchio and Red Cabbage

The next time you are in the grocery store, and you have no idea which vegetable to choose, know this:

If ever the price of radicchio puts you off and you try to be smart by choosing red cabbage, you’ll be making a big mistake (ok, maybe not so big).
Both have their places in the kitchen but are not interchangeable. Red cabbage is best used in shredded cabbage salad, and radicchio is excellent in mixed salads.
If you’re looking for an Italian salad with a strong taste, you’d better go with radicchio. Because of its bitterness, it blends well with acidic ingredients, such as citrus or lemon vinaigrette with sweet ingredients.
Nutritionally, radicchio is as nutrient-rich as red cabbage, so I won’t compare the two.

The Triple Power of My Mix Salad

The following salad is very appetizing but also very nourishing and cleansing. I mixed radicchio leaves with endive leaves and arugula to increase the healing properties of the mixed greens.
Endive belongs to the same family of radicchio, which purifies the blood, stimulates the immune system, and acts as a diuretic. Arugula belongs to the cruciferous family, which is known for its anti-cancer properties. It cleans heavy metals (chelation properties) and removes pesticides and herbicides from the body. It’s also rich in protein.
To prepare this recipe even quicker, you can add a mesclun salad to your radicchio leaves to enjoy the same benefits.
For my next recipe, I initially wanted to add an exotic and sweet taste by trying to recreate pomegranate molasses, often used in Middle Eastern cuisine. The goal here was to cut the bitterness of the dish. I extracted the pomegranate juice that I had mixed with the maple syrup previously, and then I made my vinaigrette.
Yeah, I could’ve alternatively used store-bought pomegranate molasse. But you know, I wanted to stay on the whole food side. Not a biggie if you use it.
But after I remembered my main motto: help people prepare simple and quick dishes. So to stay in the whole food arena, I opted for raspberries. Raspberries have the same sweet and sour taste and are just as delicious and as antioxidant-packed as pomegranate.
Endives and pistachios give the crunchy side. The lemon raspberry vinaigrette brings freshness and sweetness to the mouth. As a finishing touch, I added my almond ricotta to provide an exquisite and comforting sensation.
If you want to have a pleasant tasting experience, even if the radicchio is more expensive, it’s totally worth it. 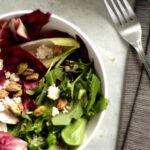 Curative Radicchio Salad to the Power of 3

Placed in an airtight container without the vinaigrette, this salad will keep for four days. VARIATIONS Add sunflower sprouts and replace the pistachios with pine nuts.
beenhere

If you try this recipe, I want to know about it! Leave me a comment below or share it on Instagram. Tag @biting.into.life with the hashtag #bitingintolife.